On invitation by the Platform for International Education (PIE), 26 representatives of Dutch institutes for higher education and professional development (members of PIE) and 34 representatives of their Southern partners from 15 different countries discussed how to achieve equitable and inspirational partnerships on November 25, 2021 (also see Facts & Figures below). The dialogue aimed to spark an international dialogue with all partners, discussing future cooperation programmes, considering lessons learned in the past. This brief report summarises the main insight gained and starts with the main findings from a survey commissioned under PIE-members and their partners in the Global South with the aim of getting a first understanding of opinions about partnerships (also as part of setting the stage for the online dialogue).

The PIE Dialogue of November 25 was the second online event that PIE organised. The first took place April 22, 2021 under the title ‘Crucial elements for future proof education & research partnerships with the Global South’. Whereas in the April event mainly the Dutch PIE members (and the Ministry of Foreign Affairs) participated, the November event was explicitly meant for a dialogue between Southern partners and their Dutch counterparts.

PIE aimed at diverse and inclusive participation from both the webinar organisation and the participants. The November event was organised by an organising committee consisting of eight people from Dutch and Southern organisations:

The November event was evidently communicated well with 150 partners registering from 18 different PIE member institutes. In the end, a total of 60 people indeed participated, the majority from outside of the Netherlands.

In total 74 people from 41 different countries (see Figure 1) participated in the survey. A few countries stand out in number of respondents. The Netherlands, for instance, is well represented with 12 respondents (as expected) but so is Nigeria with 8 respondents. We can then add three respondents each from Ethiopia and South Africa, and two each from Mozambique, Uganda, Rwanda, Egypt Nepal, Myanmar, India, Vietnam and Bhutan.

Central in the survey were nine statements regarding partnerships with respondents being asked to indicate the extent to which they personally agreed with these statements. Figure 2 provides an overview of the results and shows that all respondents (fully) agree that a partnership should encourage mutual learning. An unsurprising finding considering that most (if not all) respondents will most likely have reasoned principally from the OKP-partnerships between Dutch institutes for higher education and their international partners in the Global South.

With many of the other ‘elements of partnership’ included in the survey, the (vast) majority of participants (fully) agree. So, we see that for instance 92% (fully) agree that there should be mutual accountability in partnership, that 90% feels decisions in a partnership should be taken by consensus, and that 85% sees flexibility (e.g. to divert from the agreed upon plan and programme) as a crucial component in any partnership. In all these, and a few more, cases only few respondents deviate from this main opinion.

Differences between respondents start to emerge when talking about rights and obligations but also here a majority (fully) agrees that all partners should have equal rights (78%) and/or equal obligations (73%). The idea, however, that an equitable and inspirational partnership is characterised by parties contributing equally in financial sense is clearly a bridge too far for most. Here only 12% (fully) agree and a majority (61%) clearly (fully) disagrees and 24% takes a neutral stand in this. Interestingly, all Dutch respondents (fully) disagree with the idea of equal financial contributions (as do all participants from other European countries).

Finally, respondents were asked to indicate their expectations of the Dialogue on November 25th. A quick and dirty grouping of these expectations shows that sharing and learning about partnerships, and perhaps more specifically on the do’s and don’ts of collaboration was the biggest priority for most people. One respondent thus expected to ‘get more ideas on collaboration which will lead to build stronger bonds between the two parties’, while another wanted ‘to learn new strategies for fostering or creating partnerships that have been implemented in other territories’ and yet another to ‘discuss dilemmas, opportunities and challenges of equal partnerships’. Some included a specific idea (e.g. ‘strong sense of understanding that a partnership based upon knowledge and teaching is a two way street’) while others emphasised their wish to ‘learn from other experiences’. For some people, the Dialogue also offered an opportunity to learn specifically about the future of the OKP programme, while others stressed that they saw the Dialogue first and foremost as a way to ‘find [a new or Dutch or international] partner’.

The Dialogue: Towards equitable & inspirational partnerships of knowledge exchange

The online dialogue ‘Towards equitable & inspirational partnerships or knowledge exchange’ took place on November 25th, 2021 from 10.00 to 12.00 hr (CET). During these two hours, we had a full programme with stimulating presentations, discussions in smaller groups (i.e. breakout rooms) and plenary reflections. The programme is presented below.

During the webinar, the keynote presentation was given by Delft University of Technology and Thuyloi University (Vietnam) on their 30 years of educating together in the field of water resources management and hydraulic engineering. This cooperation started decades ago with research exchange and engineer residencies, and over the years blossomed into a long-term partnership of knowledge exchange and a joint venture named VINWATER. The speakers expressed that this inspirational partnership became possible due to a strong foundation and long-term relationship of trust, respect and mutual ownership. For more information on this cooperation, please visit https://www.tudelft.nl/citg/vietnam . 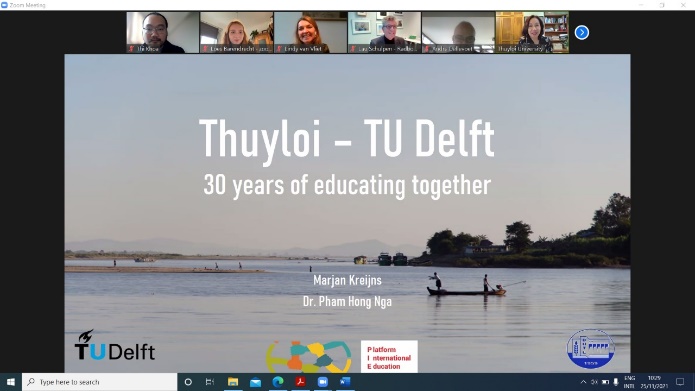 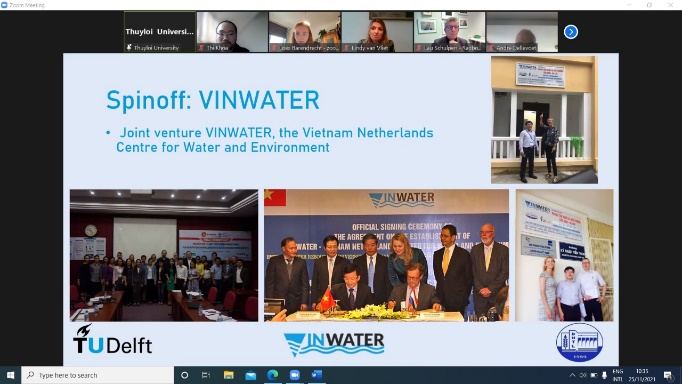 While the first breakout session was principally meant as a ‘get-to-know-each-other’, the second explored participants’ ideas about central elements of an equitable and inspirational partnerships. ‘Trust’ and ‘respect’ undoubtedly emerged as the most central elements as the word cloud (based on a plenary Mentimeter question with all participants) below clearly shows. Still, there were many other elements mentioned and in breakout session 2, participants further refined and defined such elements. For instance, by talking about the need for inspiration, the need of ‘being interested in each other’, the ability ‘to listen to each other’, to ‘be honest’, ‘to respect different worldviews’, to ‘talk about expectations’, to ‘take decisions by consensus’, to include sufficient time ‘to trust each other’, and to have ‘patience’. The latter was then directly linked to the often expressed need for ‘long term relationships’ allowing for time to get to know and trust each other. As with the survey (see above), financial issues remained most often unspoken and were thus not included in this search for central elements of partnership.

Figure 3.    Word cloud based on the question: ‘What is for you the most important element     characterising an equitable and inspirational partnership?’ 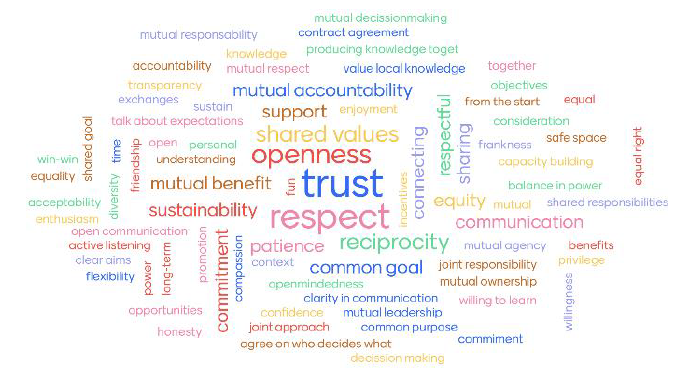 All these different elements were then prioritised resulting in a second word cloud in search of the three most important elements for partnerships according to participants (see Figure 4). ‘Trust’ then remained firmly in the centre – directly followed by ‘mutual benefit’ (emphasising that partnership is a two-way arrangement). 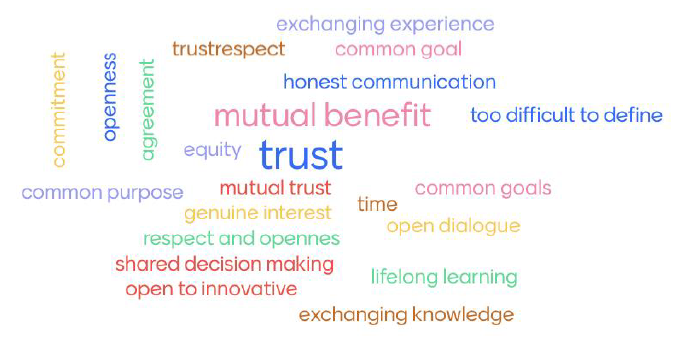 In the third breakout session, participants were asked to identify concrete ways forward by formulating recommendations on actions for change for specific actors. The actors central in these discussions were manyfold although most recommendations were geared at funders and at directors/colleagues at Dutch institutes (as compared to for example directors/colleagues at LMIC based institutions). Recommendations then ranged from ‘learn from other partnerships’ to the need to ‘co-create from the start, beginning with the (pre)proposal writing stage’, and from the need to actively search for ways of ‘including Southern partners in decision making and needs assessments’ to the need to focus on commonalities instead of on differences. One recommendation brought forward in practically all breakout rooms was (again) time and thus the need for long-term relationships and commitment (and donors facilitating this by e.g. ‘retaining longer term financing’).

In the end, six main take-aways were discussed in a plenary session – take-aways considered crucial for reaching equitable & inspirational partnerships of knowledge exchange and meant for all actors involved in (and with) such partnerships. The main take-aways from the dialogue are:

For us, as international organising committee of this online Dialogue, the interactive and inclusive process leading towards the Dialogue was already rewarding and we feel that the Dialogue itself was inspirational. We are happy to note that the latter was shared by the participants of whom 60% in the evaluation at the end indicated to feel ‘inspired’, 43% (also) felt ‘connected’, and 26% (also) ‘activated’.

Based on this, PIE will soon inform you about the way we plan to further strengthen the discussion about partnership between (and with) it’s Dutch member institutions and their Southern-based partners.